I used to eat oatmeal every single morning. For years. Steel cut oats, soaked overnight (to reduce phytic acid levels and improve digestibility and mineral absorption), with butter or cream, nuts/nut butter, sometimes an egg cracked in, and usually berries to “sweeten” (who was I kidding, it wasn’t sweet!).

I did it the “right” way. No naked carbs. I’d be stuffed and bloated for about 30-60 minutes, then not long after, starving. I could never get through the morning without a snack. Never.

I know now that I lived for years with reactive hypoglycemia (blood sugar dropping too low). I’d joke that I’d have “emergency snacks” in my purse because I often couldn’t make it until the next meal.

CGM Experiment Part 2: Once you “fix your breakfast,” you never go back

Until I “fixed my breakfast,” I had no idea that people could go more than 2-3 hrs without a snack. And by “fixing my breakfast,” I mean that I now consciously choose to eat a sufficient portion of protein and fat, paired with a moderate portion of slow-digesting carbs. This avoids both a major blood sugar spike and the inevitable crash.

I ditched oatmeal years ago in place of higher protein breakfasts (you’ll see dozens of examples if you scroll my Instagram feed), but it wasn’t until 2018 when I first wore a continuous glucose monitor (CGM) that I understood why I felt so awful after eating oatmeal.

At that time, I tested a “dietitian-approved” breakfast of oatmeal, milk, berries, and a measly teaspoon of honey (not even enough to make it sweet or palatable) and had a massive 104 point spike in my blood sugar.

Many have asked me to repeat this experiment, but with added fat/protein and no honey. Well, here it is folks (see image below). I added an unsweetened beef protein powder (added 12 grams of complete protein — approximately 2 eggs worth), some heavy cream for fat, and cinnamon for flavor (and a possible glycemic benefit).

Despite this, I spiked 60mg/dl. Yes, SIXTY points.

A 60 point spike is better than 104, yes. But I still got all the icky feelings that I experienced DAILY for years when eating oatmeal (Yes, even when I added fiber, like chia or flax. Yes, even when I have added eggs. Believe me, I’ve tried #allthethings.) 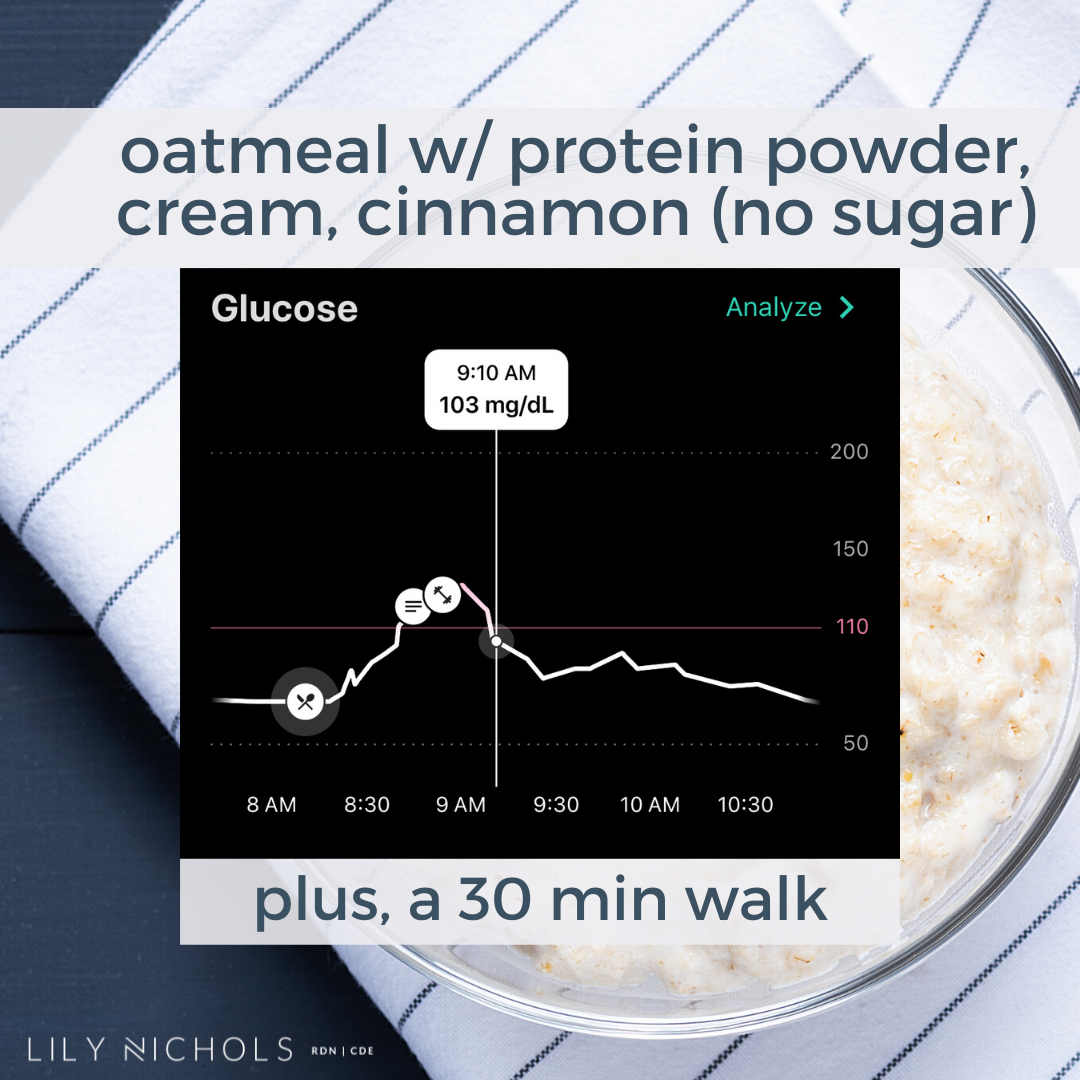 I didn’t go hypoglycemic this particular day, but I felt awful relative to my usual breakfast. Even my husband, who’s highly active and incredibly insulin sensitive, didn’t feel well after the oatmeal (even though he didn’t spike as much as me; we both did a CGM experiment at the same time).

Oatmeal with “all the things” might work well for you. If you truly feel well, carry on! But DO pay close attention. My husband commented that if he hadn’t been with me for nearly 2 decades (and therefore, mostly eating similarly to me, at least when he’s at home), he probably wouldn’t have noticed that he felt “off” with oatmeal.

Most people don’t actually feel that well on a day-to-day basis. We do. And we notice, even when it’s subtle, that something is off.

No, neither of us had a blood sugar spike into the prediabetic range, but the rapid change in our levels clearly sent off some emergency signals in our body. We both felt our pulse/heart rate rise, felt a bit jittery, and then felt slightly lethargic as our blood sugar dropped. He didn’t spike as much, but he crashed faster and lower than me.

Are you sure your blood sugar didn’t spike? Or did you miss the spike?

If this was a client presenting me with only a single 1 or 2-hour post-meal blood sugar reading, I may have even congratulated them on a “blood sugar balanced” meal; however, in this case, my blood sugar peaked at 30 minutes after the meal. This is a good sign that my body has the capacity to handle blood sugar spikes by pumping out a large bolus of insulin, yes. For that, I am thankful.

But when this system gets “used and abused” for years on end, eventually the pancreatic cells that produce insulin get worn out. We call this beta cell burnout. And eventually, the body becomes less and less responsive to insulin, because insulin levels are almost constantly high. (Imagine a nosey neighbor constantly knocking at your door; eventually, you tune out their incessant knocking and stop opening the door as often.)

That is the very beginning of prediabetes, which, over the course of many many years, eventually can lead to type 2 diabetes.

Even, if you want to argue that I should not be concerned over a “normal” blood sugar spike and insulin response, at the end of the day, I did not feel well after this meal. I felt excellent after the other breakfast of eggs, asparagus, sourdough, and butter. Or on another day, a breakfast of 3 eggs, sausage, and a small side of hash browns. I would still choose — solely from a well-being standpoint — to opt for the egg breakfast over oatmeal any day.

Interestingly, both meals have nearly identical amounts of protein, but the oatmeal breakfast had more carbohydrates. Also, the carbohydrates in the egg-based breakfast was my homemade sourdough. Sourdough is known to have a dramatically lower glycemic index compared to other bread (or unfermented grains, though make note that I did soak the oatmeal overnight prior to cooking). 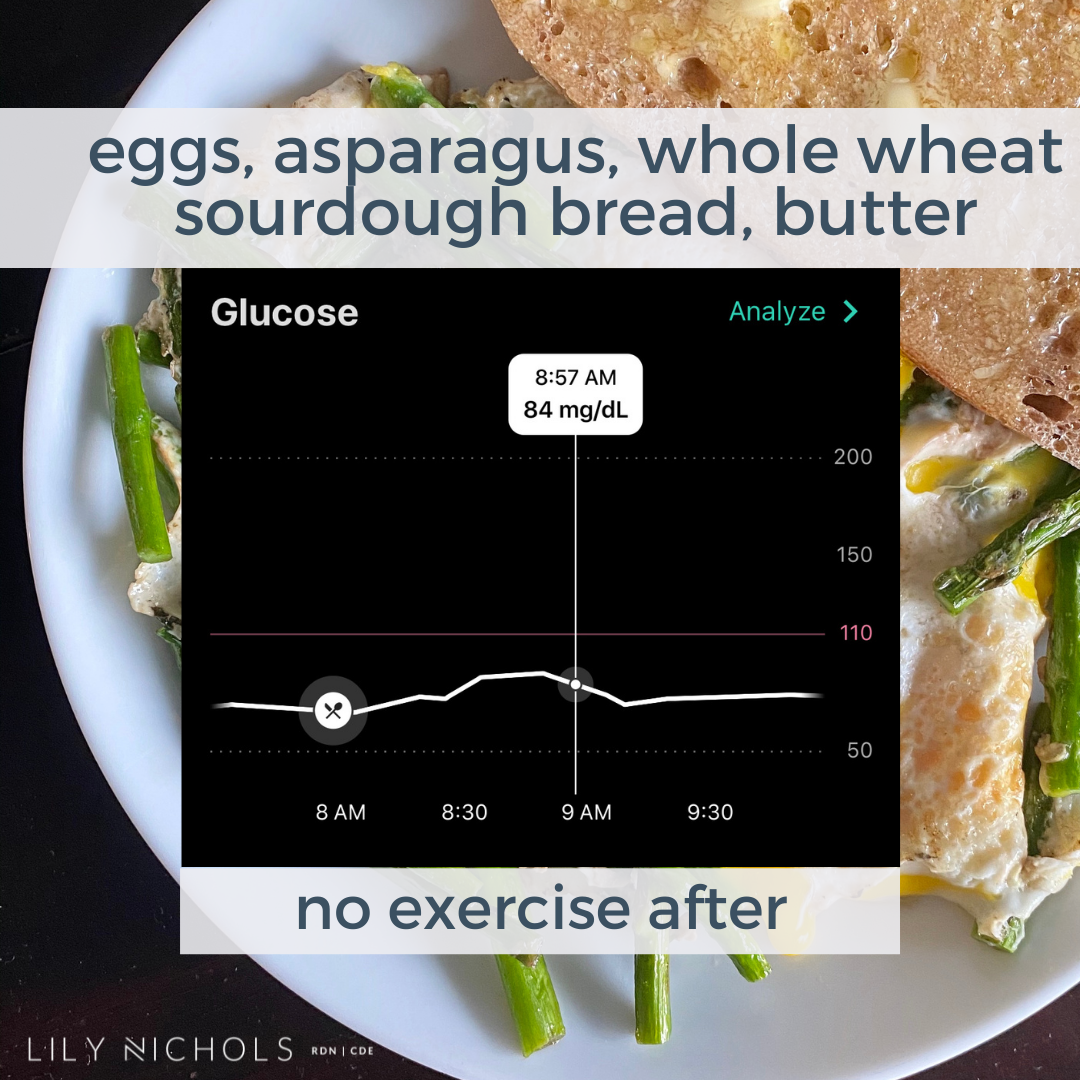 To be clear, I am not anti-oats. And I have no plans to ‘ban” them from my diet entirely. I still like the flavor and texture of oats in certain things, like the topping on an apple crisp or in oatmeal raisin cookies. I will still eat those from time to time with zero qualms. They simply won’t be a daily food choice around here.

I also acknowledge that some people do tolerate oatmeal with less of a blood sugar spike than me. That’s the beauty of using a CGM. You can identify which foods uniquely spike your blood sugar and adjust accordingly.

Although you may want to write off my assessment as an N of 1 anecdote, there’s actually quite a bit of data showing that higher protein, low glycemic breakfasts are beneficial.

Whether the study is on children, adolescents, adults (male or female), and people with (or without) diabetes, overwhelmingly the data shows better blood sugar regulation, better satiety, easier time maintaining a healthy weight, and overall better nutrient intake when people eat a lower glycemic, protein-sufficient breakfast. This includes the studies looking at eating a protein-rich breakfast versus skipping breakfast, by the way. A number of such studies are listed in the references at the end of this article.

When you fix your breakfast, your whole day is better

Ultimately, “fixing breakfast” remains priority number 1 for me, as it has for virtually my entire career as a dietitian. When you “fix breakfast,” everything else falls into place. Well, maybe not *everything,* but chances are you’ll have better energy and focus, stay full longer between meals (so you’re naturally less snack-y or prone to reach for sugar/caffeine as a pick-me-up), and be less prone to overeat the rest of the day.

To give you one example, a study compared two breakfasts of equivalent calories on overall energy intake and satiety. The participants were given either a breakfast of eggs and toast OR a breakfast of cereal, milk, and orange juice. Again, calories were equal.

Compared to the cereal group, the egg and toast group were:

This is simply what happens when you are better nourished and your blood sugar stays balanced. Try it for yourself and report back in the comments below. If you check out this post on IG, you’ll see just how many people commented on the dramatic difference they’ve observed after “fixing their breakfast.” What have you got to lose? Give it a go for even 2-3 days.

If you need some ideas for a more balanced breakfast, check out my (very old, but still relevant) article “the healthy breakfast mistake” on my site. It’s almost 10 years old, but I still stand by every word!

I am personally a big fan of eggs for breakfast, but maybe they’re not for you (or you just want some alternatives).

Many people ask me what they can do for breakfast that has protein if they don’t like or can’t eat eggs. There are many, many options, so think outside the box.

Want to try your own CGM experiment? Here’s how to get a CGM

If you want to try a CGM for yourself, in most countries, you can get them OTC at a pharmacy. In the US, you either need a prescription or you need to go through a service, such as Levels. Use this link to cut the 150k+ waitlist (affiliate link).

In my first CGM article, I go through more of the basics on procuring a CGM and how they work. You can read that here.

By the way, the cool black graphs you’ll see in this article came from the Levels app. If you’re new to understanding blood sugar, it can be really helpful to interpret the response.

For me, I have 10+ years as a certified diabetes educator under my belt, so I have no trouble interpreting readings and putting them into context relative to someone who has diabetes verus someone like myself who has a functional pancreas and good insulin sensitivity. Their app makes it much easier for the average consumer compared to the standard app provided by Libre. 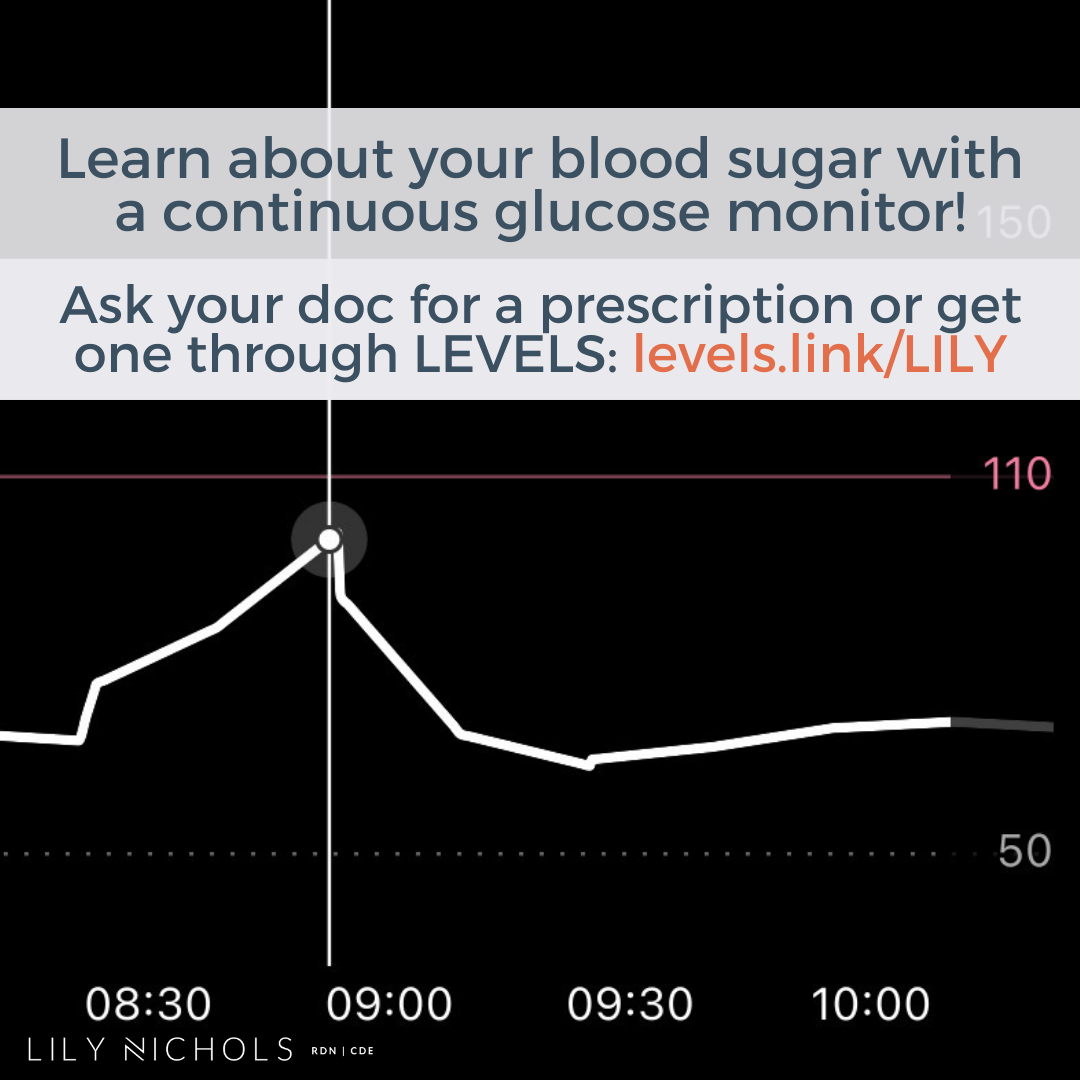 Until next time,
Lily

PS — By popular demand, I tested out the consumption of dates (the dried fruit of the date palm) to see my blood sugar response while wearing this CGM. Many women consume dates, particularly toward the end of pregnancy, in hopes that it helps improve labor outcomes.

If you haven’t yet read my article on eating dates, what are you waiting for? In addition to covering the research on the consumption of dates in pregnancy, I also share my blood sugar responses (CGM graphs) to the various date combinations. I was able to find ONE way of eating dates that avoided a spike, much to my surprise. 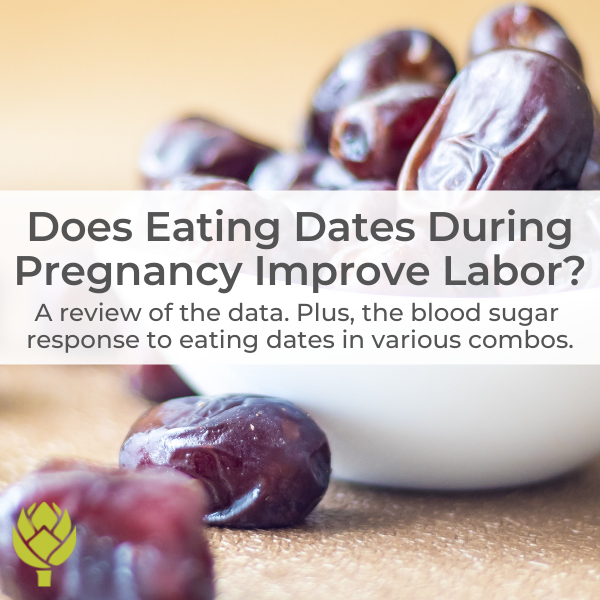