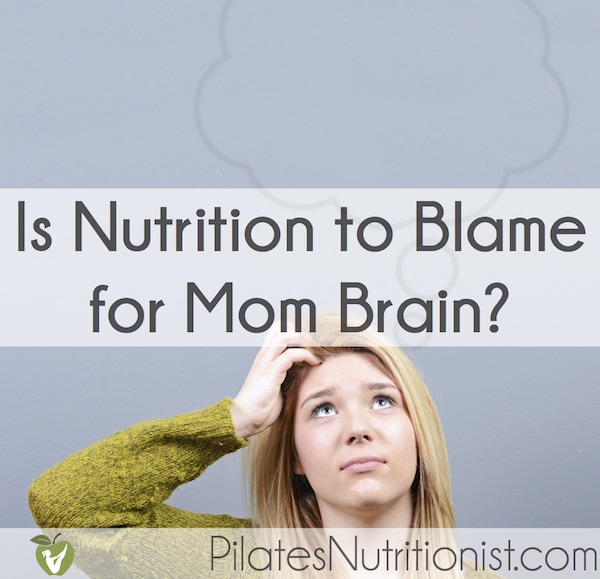 “I truly, honestly cannot remember the simplest of tasks.”

“I went to the grocery store and forgot the one thing that I went there for in the first place.”

“If I don’t set reminders on my phone, I’m literally screwed. Whatever it was simply doesn’t exist.”

If – after having a baby – simple details seem to evaporate into thin air, you can’t seem to put together complete sentences, and you start doing wonky things like putting ice cream in the fridge, mom brain is to blame.

You didn’t think “pregnancy brain” could get any worse, but it. just. did.

And you might point the finger at sleep deprivation – don’t get me wrong, as a new mom myself I GET it – but there could a nutritional reason mom brain is getting the best of you.

Pregnancy and breastfeeding place HUGE nutritional demands on your body.

Not only have you just grown an entire human(!!!), but now your body is providing the sole source of nutrition for this rapidly developing baby that will likely double his or her birth weight by ~6 months. (

And you do it while operating on only a fraction of the sleep you used to get, without as much time to prepare nourishing meals, and probably juggling a whole host of other responsibilities.

It’s no wonder so many moms are nutritionally depleted postpartum!

A lot of women stop taking their prenatal vitamins or supplements after baby arrives, thinking that they’re in the clear. At a time when nutrition matters most, I know it’s hard to keep up, but I’d argue that trying to function with “mom brain” is a worse trade off.

Your brain is different after having a baby, and not just because of the hormones.

Is Nutrition to Blame for Mom Brain?

One key brain-boosting nutrient becomes depleted in the brain as a result of pregnancy and breastfeeding: DHA.

It’s incorporated into the phospholipid structure of every brain cell, impacting how neuronal signals are sent and received (and, of course, playing an important role in the baby’s brain development as well!).

“Within the membranes of neuronal cells, phospholipids form the surrounding microenvironment, and thus influence the conformation and function of receptors, ion channels, and other membrane-bound proteins.” (J Nutr, 2006)

Studies on female rats fed a low omega-3 diet have shown that concentrations of DHA in the brain drop by ~18% after a single “reproductive cycle.” (J Nutr, 2006)

In other words, pregnancy depletes the brain of DHA pretty significantly, especially if the diet is lacking in omega-3s.

And most pregnant women don’t get nearly enough omega-3s in their diet.

In one study of pregnant Canadian women, fully 90% did not meet the minimum daily recommended intake of DHA. Average DHA intake among these women was a paltry 83 mg/day (recommended levels are 300 mg/day or more). (J Nutr, 2005)

While we can only theorize what’s going on in the human brain (extracting a mom’s brain and measuring DHA content might not pass the IRB!), we DO have data showing blood levels of DHA decline during pregnancy. (Eur J Clin Nutr. 1997) Researchers think it’s likely that DHA is also being depleted in the brain.

Since low levels of DHA have been linked to reduced cognitive function, depression, and greater susceptibility to stress – and we know that pregnancy and breastfeeding increase demands for this special fat – it’s crucial to consume enough DHA during and after pregnancy if you want to keep mom brain at bay.

So do yourself a favor and give your mom brain a little love in the form of DHA, will ya?

What to Eat to Help Mom Brain?

Here are some ways to get enough DHA:

Better yet, put these on your weekly shopping list NOW, so they don’t become another one of those ‘I-wish-I-could-remember-that’ items.

PS – Quick note on omega-3 and DHA: These two terms are NOT interchangeable. DHA is a special type of omega-3, so not all foods that are rich in omega-3 contain DHA.

Plant foods, with the exception of certain types of algae, do NOT contain DHA. So don’t expect flaxseeds or chia seeds to cut it.

If you’d like more in-depth information on DHA and why it’s absolutely critical to consume it directly in your diet during pregnancy and breastfeeding, read Chapter 5 of my book, Real Food for Gestational Diabetes for all the nitty-gritty research.