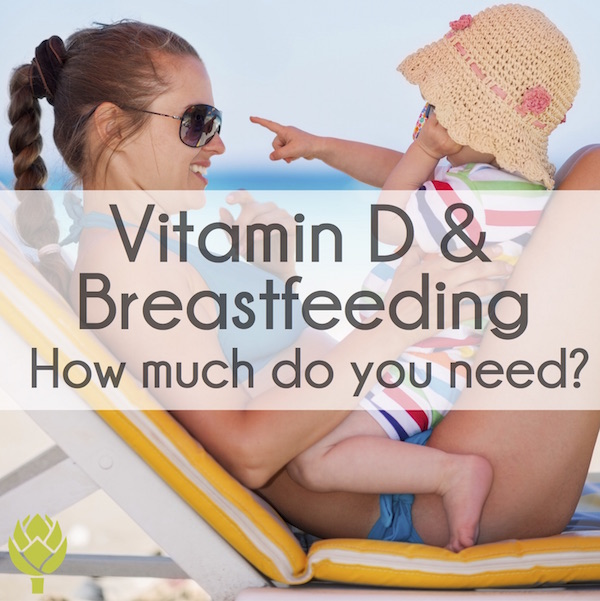 Vitamin D is an incredibly important nutrient (technically, a hormone) that regulates numerous functions in the body, from blood sugar metabolism, to brain function, to thyroid health, to bone strength.

It seems to be involved, on some level, in just about every bodily system.

As I’ve written about before, vitamin D deficiency is both common and entirely treatable.

Since I specialize in prenatal nutrition, I tend to get a lot of questions about nutrition for breastfeeding. I’ve discussed it several times on the blog and in podcast interviews.

Breastfeeding is a unique time when nutrient demands are high, as both mom and baby are reliant on maternal intake or maternal nutrient stores.

Vitamin D Supplement for Breastfeeding Mothers: How Much?

Studies on the vitamin D content of breastmilk show that most women’s milk is low in vitamin D. This has led some to believe that vitamin D doesn’t transfer to breastmilk in sufficient quantities, but that’s an uneducated conclusion.

Why would breastmilk be a poor source of vitamin D?

Because most women don’t get enough themselves!

“From the standpoint of nature, low vitamin D content in breast milk is an odd circumstance. Would nature allow so little vitamin D in breast milk that the nursing infant would develop rickets from ingesting it? We did not believe so. Our belief was that breast milk was deficient in vitamin D due solely to lack of solar exposure and dietary recommendations for vitamin D put forth in recent decades.“ (Pediatrics, 2015)

Breastmilk is SUPPOSED to have enough vitamin D in it for you and baby, but if you are not taking in enough vitamin D, there’s simply not enough to transfer into breastmilk.

This is the primary reason the American Academy of Pediatrics recommends supplementing breastfed infants with 400 IU per day (formula is fortified with vitamin D, so the levels are consistent, which is why this recommendation is solely for breastfed infants).

The problem is, few pediatricians get the word out and/or not many follow through with the advice. In fact, only 2-19% of infants end up supplemented with vitamin D. (Pediatrics, 2015)

And it can lead to major problems, like rickets (extremely weak and brittle bones).

In my eyes, given everything we know about vitamin D, wouldn’t you want to correct the source of the problem – maternal vitamin D intake?

The gist of their findings: Women receiving 6400 IU of vitamin D per day had higher vitamin D levels and passed enough vitamin D into their breastmilk to meet the demands of their baby (without the need to directly give the baby a separate infant vitamin D supplement).

(Side note: The study originally was trying to test lower doses of maternal vitamin D supplementation as well, but had to stop the 2400 IU arm of the study for ethical reasons, namely, because infants were not receiving enough vitamin D from breastmilk alone.)

What does this mean for breastfeeding moms?

You have the option to take vitamin D yourself (6,400 IU per day) to boost the vitamin D content of your breastmilk instead of giving a separate supplement to your infant.

To me, this a two-birds-with-one-stone situation.

Both you and your baby need vitamin D. Why not take it yourself?

One important note from this study: Don’t assume that the vitamin D levels in your breastmilk will be high if your blood levels are adequate.

Circulating 25-OH vitamin D does not readily transfer into breastmilk, but vitamin D (from sunlight, food and supplements) does.

This is counterintuitive, but a very important distinction to know about:

“Universally, the antirachitic activity of human milk is quite low, 5 to 80 IU/L, unless the lactating mother is ingesting a significant amount of vitamin D daily or getting significant total body UV exposure. It is the parent compound, vitamin D itself, which overwhelmingly gets transferred into human milk from the maternal circulation. This is an important yet almost universally misunderstood fact. Although circulating vitamin D readily gains access to human milk, circulating 25(OH)D does not, and this transfer relationship occurs over a massive range of vitamin D intakes and/or circulating levels. Thus, one cannot assume that because a lactating mother’s circulating 25(OH)D level is adequate, her milk vitamin D activity will be.” (Pediatrics, 2015)

Did your doctor/pediatrician recommend a vitamin D supplement (for either you or baby)?

Let me know in the comments below.

PS – Many people mistakenly believe they can get enough vitamin D by sitting outside in the sun for 15 minutes a few days a week or drinking milk. Be sure to read my post on vitamin D: 10 Things You Didn’t Know About Vitamin D for the truth on these common vitamin D myths.

PPS – Are you a research junkie like me? If you’d like to read the full study about vitamin D supplements and breastfeeding, it’s open access and freely available from Dr. Google: