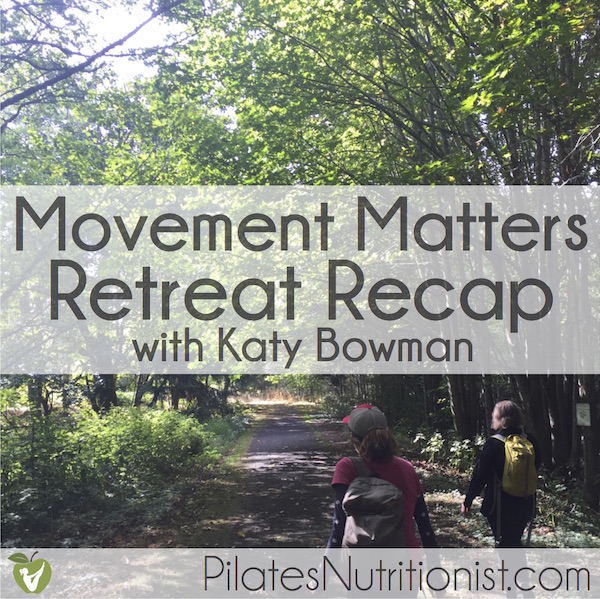 I spent this past weekend at Katy Bowman’s Movement Matters Retreat in the lush Olympic Peninsula of Washington state (an area I’m lucky to currently reside in), soaking up as much insight as I could from her. Like thousands of others, Katy’s work has had a big impact on the way that I view movement (beyond “exercise”) and the way I structure my life and business.

If you’re not familiar with Katy, she’s a biomechanist that has taken movement science outside of the lab and outside of the box, emphasizing that a lot of the aches, pains, and messed up movement patterns we have are a result of the way we move (or don’t) throughout our lives. They cannot simply be fixed with an hour or two of corrective exercise or physical therapy or a gym session while we spend the rest of the day seated at a desk. We are so far removed from our ancestral movement patterns that our bodies have developed all sorts of (not necessarily good) coping mechanisms to put up with a highly sedentary life. I hate to paraphrase her approach because it’s so much more and I’m sure she’d have a way more eloquent way to say it all, but that’s my short (albeit definitely imperfect) way of describing it. I highly recommend checking out her site, Nutritious Movement, her podcast, and many books.

For example, one of her podcast episodes (sorry I can’t remember which one) really changed my thoughts on movement with my son, babywearing (I started babywearing a lot less and holding him instead), and positioning for breastfeeding – all for the better, of course. There are just so many little nuggets hiding in virtually everything she talks or writes about. 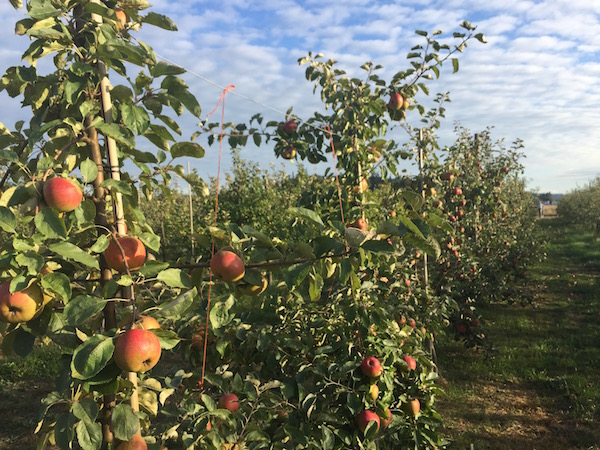 This retreat, the first of its kind, was aptly named Seed to Cider, River to Sea.

We spent one day at an organic farm and cidery, Finnriver Farm & Cidery, doing farm work (saving seeds, picking apples, weeding, etc) and exploring the ways that movement is connected to our food system and our lives. I knew I was in the right place when I showed up and literally everyone was in minimalist footwear or barefoot. We had movement classes sprinkled within the day covering our feet, hips, knees, spine, pelvis, and shoulders and ways to align ourselves and play with the different sensations of doing a movement one way or another.

We spent a lot of time talking about walking because the second day we had a 20 mile walk ahead of us (not a typo; twenty miles). What I loved about these conversations was that she pointed out that there are no “wrong” or “right” ways to walk; just different ways. Shifting the way in which you walk helps your body cope with extended periods of movements without getting fatigued. I failed to take notes (tsk, tsk), so allow me to paraphrase, but her comment that “a 20 mile walk is not a 5 mile walk times 4” really resonated with me. The way you walk during mile 1 will be different from mile 12 and mile 19. And that’s okay and to be expected. Yes, one part of your body may become fatigued, but you can shift your loads and play around with your alignment and gait to take the work off of one part of your body and let another part do the work.

On some levels this is common sense, but so often we get stuck into thinking there are right and wrong ways to do things rather than different ways to accomplish the same thing. She encouraged taking your backpack off your back for a while and holding it in your hands or on your front or on one side or on your head (etc.), walking with your feet in slightly different alignment (turned in, turned out, shifting weight from balls to heels), playing with hip alignment, allowing the muscles in your trunk to help lift your leg rather than relying on the leg muscles to do it all (‘cause they shouldn’t; walking is a full body movement) – these are just a handful of examples that make so much sense, but aren’t frequently mentioned.

Especially with my background in Pilates, where there is almost always a “right” and “wrong” way to move, this freedom to explore and do differently, while still honoring the importance of proper alignment and awareness of each of these movement choices is so nice. It’s about finding symmetry over the course of the entire day’s movements, not finding symmetry in every single movement. 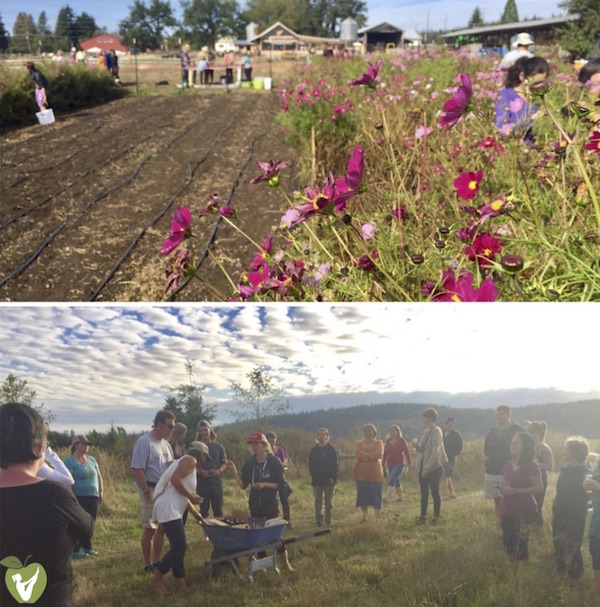 We finished off the day with a “roving wheelbarrow cider tasting,” where, quite literally, we walked around Finnriver Farm & Cidery with a wheelbarrow full of hard cider and tasted the varieties, while the co-founder Crystie Kisler, shared stories about the farm’s history, evolution, and of course, what makes each cider special. Oh, and don’t forget the delicious local organic dinner at the cidery. All in all, it was pretty much the most fun “adult” day I’ve had in a while.

After a night of interrupted sleep while camping with my husband and toddler (super restful, as you can imagine), I got up before sunrise to get ready for the 20 mile walk ahead of us. Honestly, it was hard to complain about the early start with a sunrise like this… 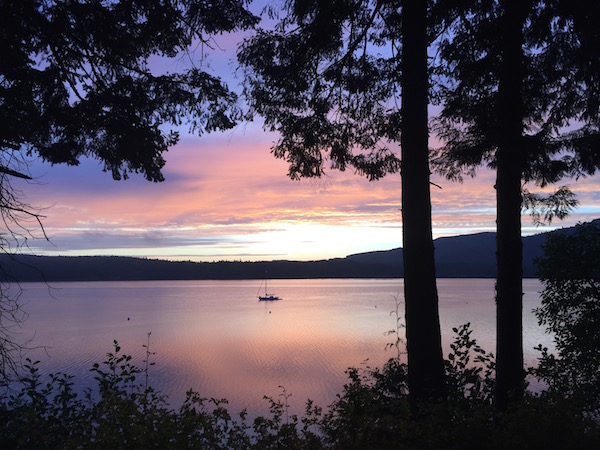 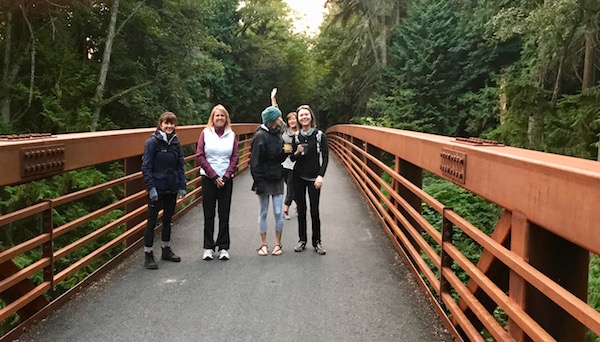 Thankfully, the often rainy peninsula cooperated beautifully for us and we had nice partly sunny conditions both days. I started the walk with a small group a little before 7am. The first 5 miles flew by. We were booking it. At about mile 7 or 8, two of us decided to take it a little slower, probably mostly definitely my fault because I kept getting distracted by all the things to forage – blackberries, salal berries, yarrow, elderberries, plantain (the herb, not the banana), wild mustard flowers – hey, varying the movement and squatting down or reaching up high for berries helps prevent fatigue!

We were so in the zone that we accidentally walked past the lunch spot, since we were ahead of the group walking with Katy and intentionally not checking technology. Ooops! By the time we stopped, we were 12 miles in (2 miles past the lunch break) and there was no way in hell we were gonna turn around. We stretched under an apple tree and ate some fallen fruit while another person on the ground crew delivered our lunch (It’s a “retreat” after all! I was so grateful not to have to haul a bunch of food).

As Katy had prepared us for, the way you walk will get subtly or obviously different the further you go. At the mile 15 stop (which I think was closer to 16-17-ish), slight alignment issues started becoming more obvious. For me, a blister on my pinkie toe was changing my gait and I was compensating by not using that leg as the “oar” to its full extent when pushing off to take the next step forward. Of course, the blister on that toe was the ultimately the result of my own imbalances in the way I walk, but became the source of an even more impaired gait pattern. Oh well. The important thing was to simply be aware of the issue and why it was happening, then to make the call whether to prioritize protecting the toe or perfecting my gait. I chose the former. Katy had mentioned that the last 5 miles go by fast. Compared to mile 10-15 section, you mentally knew the walk was almost over. It was motivating to know you had already gone so far and only had a little bit left. At the same time, I slowed down to protect my toe. Again, making the conscious choice to walk at your own pace and how it feels best for you at that moment was part of the process.

The last mile had many of us complaining. It became comical that it was nearing 4pm and we had been walking (minus maybe an hour total for breaks) since 7am. Some of us were gimp-ier than others, but we made it. Seeing the bridge that marked the ending point was a welcomed relief.

At the time time, my brain was like “I can keep going for another 5 miles if I need to.” That was something I didn’t expect, since I’m not a distance athlete by any means. I don’t do races. I have no ambitions to run a marathon. But, now I have a better understanding of what my body is capable of if I make the choice to keep on truckin’. Perhaps some longer backpacking trips are in my future?

Also, toddler wrangling has clearly been good exercise. I haven’t consciously given myself credit for all the little ways I move all day, so even though I haven’t set foot in a gym in years, all the crawling, carrying, somersaulting, and other antics of my days (where I do, on some level, try to stay aligned and vary my movement/positions) has added up. But that’s exactly Katy’s point in her work. Movement should be built into your day as you do other activities, not a separate event.

The final mile count, according to one of my walking buddies, was 21.96 miles and 45,781 steps. I’m glad I didn’t know that during the last two miles!

After a quick rest, we parted ways. A nice epsom salts bath, some yummy dinner (with lots of salt – you need it!), a mug of tea with collagen protein, and a night of sleep and I’m feeling pretty good today! Parts of my body are sore that I didn’t expect (maybe sore is the wrong word… worked?). I feel muscles in my core and trunk and of course my feet, ankles, legs, and hips were all active yesterday. Overall, it was an awesome experience.

Some takeaways from the Movement Matters Retreat that might be helpful for you:

I could probably go on and on, but I’m pretty sure that’s why Katy has written so many books. Check out Movement Matters and Move Your DNA. Both great reads.

PS – Before you go, I’d love to hear from you: Have you ever participated in an event that pushed you past your comfort zone? What was it and how did you get through it? Second, how can you incorporate more movement (and fun) into your day?