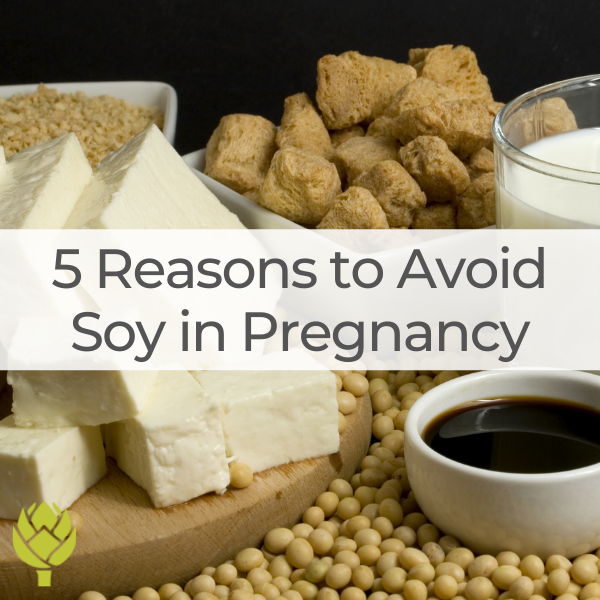 If you just found out you’re pregnant, one of the top questions on your mind is undoubtedly: “What foods do I need to avoid?”

And for good reason! Certain foods can be harmful, or at the very least, pose a questionable risk to your baby.

Ironically, many of the foods you’ll read about being ‘harmful’ are anything but. Some “off limit foods” are even vital sources of the very nutrients your baby needs to grow optimally.

But that’s a topic that deserves in-depth analysis, like you’ll find in my book, Real Food for Gestational Diabetes.

So much prenatal nutrition advice is outdated, based on shaky science (if any), and woefully in need of better oversight.

Articles from popular magazines promoting soy as a fertility food are a perfect example of good intentions gone wrong.

Despite what you’ve read about soy, it’s not the health food you think it is.

And it’s especially problematic at a time when you nutrition matters most; before and during pregnancy.

Whether soy is a mainstay in your diet or a once-in-a-while food, read below for 5 reasons to avoid soy in pregnancy, at least in large quantities.

5 Reasons to Avoid Soy in Pregnancy

1. Most Soy is Genetically Modified

Conservative estimates are that 94% of soy crops in the United States are GMO (genetically modified organisms). The majority of GMO soy is modified in a way to withstand high-doses of the pesticide glyphosate, the active ingredient in RoundUp. Essentially, farmers can spray these “special” soy plants with pesticides at doses that would kill normal soy plants but without doing any harm.

It’s probably no surprise that ‘RoundUp-Ready’ soy has high amounts of pesticide residues – among the highest contamination of any of our foods. (Food Chemistry, 2014)

If you have reservations about eating genetically modified foods, it’s worth noting that GMOs have not been tested for safety on pregnant women or their unborn babies.

2. Soy is High in Pesticide Residues

Even in soy that is not genetically modified, the majority of it is grown on large conventional farms that rely on glyphosate for weed control or as a desiccant before harvest (to dry the plant before it naturally would to allow quicker harvest).

If you think buying organic will solve the problem, don’t be so certain.

At least one company that’s run independent lab testing on organically-grown grains (Tropical Traditions) found glyphosate residues in a number of them. It’s fair to assume organic soy will have fewer glyphosate residues than the GMO or conventionally-grown soy, since organic farmers do not spray with that particular pesticide, but it’s not a 100% guarantee.

If organic farms are adjacent to conventional ones, pesticides can migrate via wind or runoff to nearby areas and contaminate the organic crops.

Why am I so worried about glyphosate residues in soy?

Exposure to glyphosate in the first trimester is linked to a higher risk of gestational diabetes. (Diabetes Care, 2007) As you know, that’s a health condition near and dear to my heart.

In addition, glyphosate has been linked to birth defects and other reproductive problems, including hormone and placental abnormalities. (Chemical Res Toxicol, 2010)

Most concerning is that glyphosate is specifically toxic to human placental cells:

“Some agricultural workers using glyphosate have pregnancy problems, but its mechanism of action in mammals is questioned. Here we show that glyphosate is toxic to human placental JEG3 cells within 18 hr with concentrations lower than those found with agricultural use, and this effect increases with concentration and time or in the presence of Roundup adjuvants.” – (Environmental Health Perspectives, 2005)

Soy is high in phytic acid, a substance that prevents absorption essential minerals calcium, magnesium, copper, iron and zinc, in your intestines.

As you know, minerals play many important functions in your body, including building the skeleton and teeth of your baby, maintaining normal blood sugar numbers (magnesium is crucial for this), and helping your baby’s brain develop properly.

I’ve talked about phytic acid in my post, “Why eating nuts upsets your stomach”, and how special (read: traditional) processing techniques can reduce phytic acid in some foods.

Soy, however, must undergo extensive fermentation for this to happen. Traditionally fermented soy products, like miso or natto, are some of the few soy foods that are fermented enough to significantly reduce phytic acid.

The majority of soy consumed in the states, however, is processed by modern methods that do not reduce phytic acid, such as soy protein isolates (which you find in protein shakes, bars, veggie burgers, meat substitutes, low carb tortillas/breads, and many other foods).

In addition to phytic acid, soy contains large amounts of other naturally occurring chemicals called “anti-nutrients.” Many of these anti-nutrients interfere with the normal action of digestive enzymes in the body, which can affect your ability to digest food and absorb the nutrients found within them.

One such anti-nutrient in soy is an “enzyme inhibitor” for the key protein-digesting enzyme called trypsin. Much like phytic acid, trypsin inhibitors in soy are particularly resistant to breakdown, even after extensive processing. (Archives of Biochemistry and Biophysics, 2003)

As you know, protein is of crucial importance during pregnancy. Intake of anything that interferes with the digestion and absorption of proteins is likely not a good idea.

Sadly, many health professionals who simply focus on grams of protein will often recommend soy as preferred food for pregnant women, unaware that trypsin inhibitors even exist. This is especially common if they follow conventional dogma and promote a low-fat diet – another misguided recommendation I tackle in Chapter 5 of Real Food for Gestational Diabetes.

Soy products contain high levels of aluminum, believed to be leached from the aluminum tanks in which soybeans are acid washed/processed, or in certain instances, from the addition of mineral salts (often aluminum chloride). Most commercial tofu, for example, is pressed in aluminum boxes (in place of the traditional wooden boxes), which leaches aluminum into the final product.

Aluminum is a toxic metal with no known beneficial effects in the human body. It preferentially accumulates in the brain and has been linked to neurological problems. (Environmental Research, 2002)

Perhaps this is why the American Academy of Pediatrics once had warnings against the use of soy formula, specifically citing aluminum toxicity as one of its concerns. It’s well-established that soy formulas “contain high concentrations of phytate, aluminum, and phytoestrogens (isoflavones), which might have untoward effects.” (Journal of Pediatric Gastroenterology and Nutrition, 2006)

Aluminum readily crosses the placenta and, at least in studies on mice, has shown toxicity to placental and uterine cells. (JBUMS, 2005)

Another study that monitored outcomes of mice exposed to aluminum via their mother’s diet during pregnancy and through lactation found “significant and dose-dependent disturbance in the levels of neurotransmitters” in mouse offspring, including serotonin and dopamine. These pups of mice that ingested aluminum also had deficits in sensory motor reflexes, movement behaviors, and weight gain. (Pharmacology Biochemistry and Behavior, 2012)

The researchers’ conclusion says it best:

“Aluminum exposure during pregnancy has potential neurotoxic hazards to the in utero developing fetus brain.”

Since we’ll likely never have randomized, controlled human studies for obvious ethical reasons, it’s probably wise to avoid aluminum exposure as much as possible during pregnancy.

So, is soy safe to eat during pregnancy?

I’ll let you re-read the evidence above and make an informed decision for yourself.

Personally, I chose to avoid most soy during pregnancy, with the exception of occasional soy sauce, miso, natto, and tempeh made from organically grown soybeans.

Still, it’s far from a staple food in my diet.

While this article focused most on pregnancy-specific effects of soy, it’s a food I don’t recommend anyone make central to their diet, male or female, pregnant or not.

If you want more evidence-based, up-to-date information about prenatal nutrition (and soy-free, nutrient-dense recipes to boot), check out my book, Real Food for Gestational Diabetes.

Before you go, I’d love to hear from you:
Did you eat soy during pregnancy? Why or why not?

PS – This article gave you a glimpse into the type of in-depth (and little-known) nutrition information I teach in my online course, the Real Food for Gestational Diabetes Course. Learn more here.