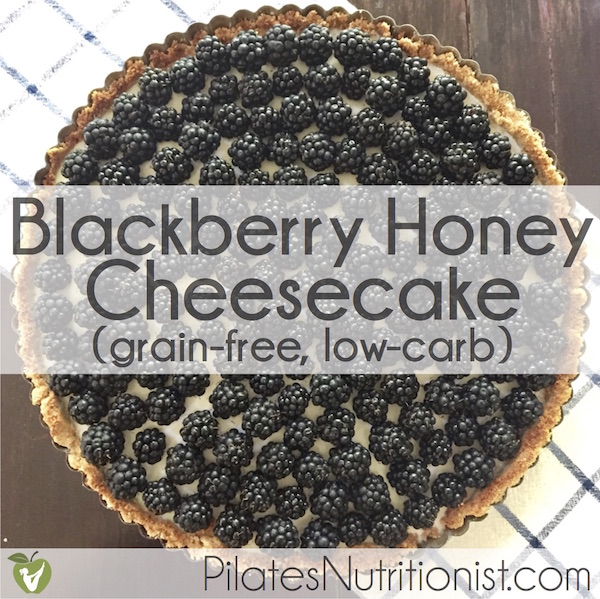 Foraging is one of my favorite past times. You can pretty much guarantee that if I’m outside, I have my eyes on the plants around me and (on a good day) will find something to nibble on.

If you’ve been following my blog for a while, you’ll recall my love of foraging from these posts: wild Alaskan berries, fiddlehead quiche, and wild pea & kale soup.

Here in the Pacific Northwest, blackberries are at their prime in late summer and early fall. Aside from their unforgiving thornes (even the underside of the leaves have ‘em!), they’re an absolute treat on the side of roads, bike paths, trails… you name it. They grow e.v.e.r.y.w.h.e.r.e.

If you find a good patch, you can easily pick several gallons at a time. Last week, I did just that and in an effort to put them to good use, combined with the fact that I had just snagged some wild blackberry honey from a local beekeeper, I had one of those lightbulb moments: blackberry honey cheesecake!

Nutritionally, you might be surprised to hear that I’m a fan of cheesecake.

But hear me out. Yes, cheesecake is high in fat, but that’s not necessarily a bad thing. Fat helps blunt your body’s blood sugar response. I frequently hear from clients and participants in my gestational diabetes course that fatty desserts (like cheesecake) yield much better blood sugar numbers than low-fat, high-sugar options (like sorbet).

Cheesecake is not a dessert that I’m inclined to overeat, I think, in part, due to its favorable glycemic response and high calorie content, but also because of its rich, creamy texture.

It’s not a conundrum; it’s basic physiology. We’ve just been given warped nutrition information that has made us focus on low calorie desserts (low fat) instead of low sugar ones. (Clearly, I’m not a fan of counting calories.) If I’m gonna bother with dessert, it’s certainly not gonna be something useless like angel food cake. (Blech…)

That said, most cheesecake is waaaay over the top sweet for my tastes. I looked up the nutrition facts for Cheesecake Factory’s lemon raspberry cheesecake (sorry, they didn’t have a blackberry cheesecake for comparison) and it has a whopping 75g of carbohydrates. That’s about 19 teaspoons of sugar – more than you get in a 20 oz soda!

I knew I wanted to make a low-er carb, less sweet cheesecake. Since I eat a diet fairly low in grains and have a sensitivity to wheat, I knew the crust would not be the traditional graham cracker or crumbled cookie crust. I also was in no mood to deal with the annoyance of baking a cheesecake in a waterbath. With a busy toddler around, I ain’t got time for that!

So what I settled on was a simple blackberry honey cheesecake that is low in added sugar with a no-bake filling and grain-free crust. It’s also super quick to throw together.

How could it be when it only has 15g net carbs per slice? Rather, it has a very delicate sweet flavor that doesn’t overpower the blackberries. I snuck in a little stevia to up the sweetness without going overboard on honey. For those who dislike the taste of stevia, I promise you can’t even taste it (my hubby was blissfully unaware).

If you prefer desserts on the sweeter side, I suggest adding an extra tablespoon or two of honey to the filling. OR, and this is my preference, drizzle a teaspoon of honey over the top of each slice immediately before serving.

Again, since I’ve worked for years to wean myself off of sugar, I like the recipe as is. Some family members who tried the recipe preferred it with that extra drizzle of honey. That really takes it over the top, but is entirely optional.

If you don’t like blackberries or don’t have them available by the vat, know that virtually any type of soft fruit (raw or cooked) would be delicious atop this cheesecake.

As written, this recipe has 15g net carbs per slice (23g total carbs, 8g fiber) if you cut it into 10 slices. Yep, it’s a high-fiber cheesecake! With a teaspoon of extra honey on top, it’s 21g net carbs. That certainly beats the 75g of carbs in a typical slice of cheesecake! 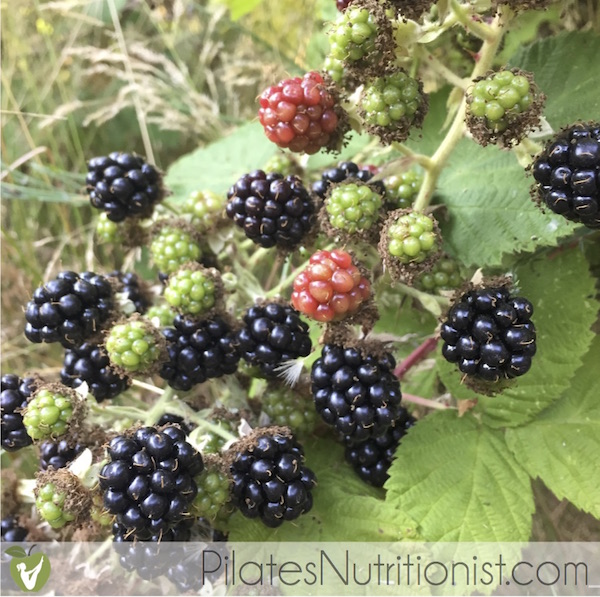 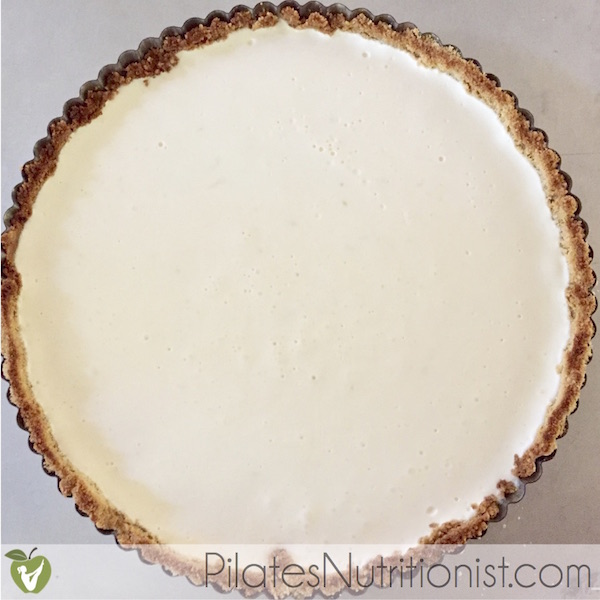 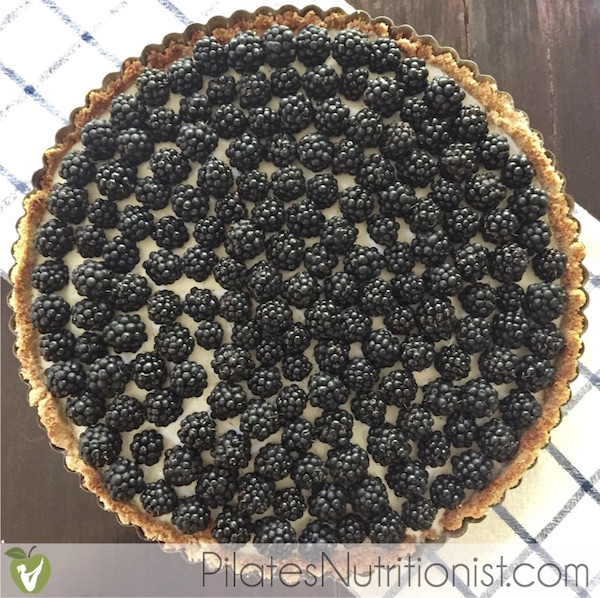 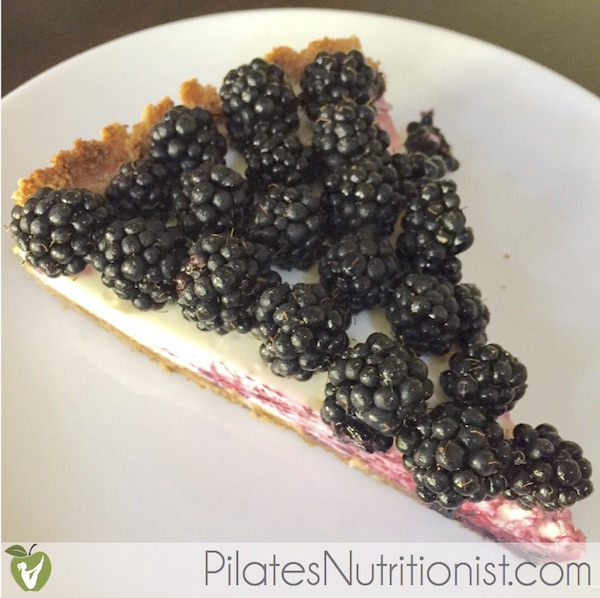 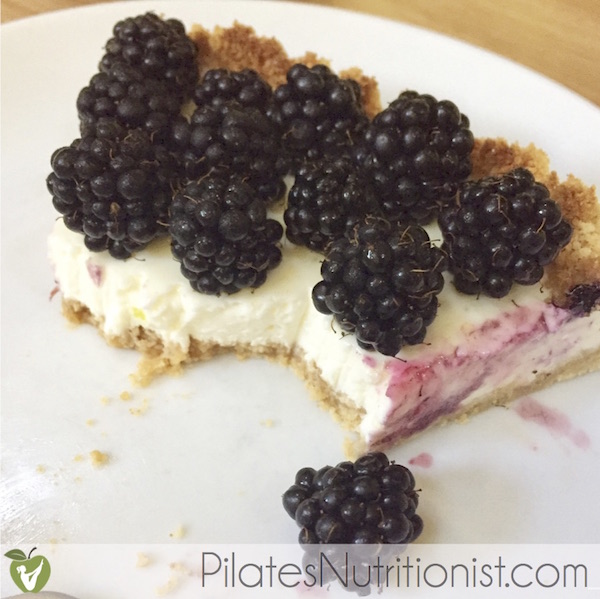 As always, when it comes to dessert, make mindful eating the norm.

Savor every bite.
Eat slowly.
Notice the contrast of the creamy filling and crunchy crust.
Taste each blackberry, noting how each one is slightly different. Some are sweet, some are tart. Some are soft and juicy, some are firm.
You deserve to enjoy dinner and dessert. It’s not a race.

If you like this recipe for blackberry honey cheesecake, let me hear your thoughts in the comments below.