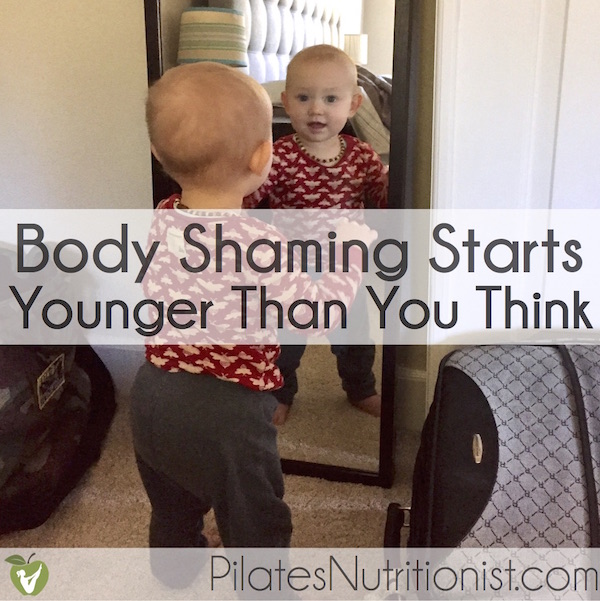 It’s all well and good until a simple observation turns into a negative thought or a brash comment. From there, it can quickly devolve.

In some ways, I feel lucky. Body shaming hasn’t been an overwhelming struggle in my life (aside from when I was pregnant – that was obnoxious!), but I recently realized that none of us can fully avoid it.

Up until high school, I was always small for my age. I remember being the smallest person in my elementary school classes, year after year. I remember lying about my weight in 8th grade, secretly adding 10 pounds to my string bean frame when asked, because I was tired of being accused of having an eating disorder (something I thankfully did NOT have. I ate like a horse!). Sadly, those 10 pounds still put me lighter than my peers and the taunts continued. It doesn’t help when you later go on to study nutrition… and teach Pilates…

Fast forward to this past year, when I had my baby, and I’ve been inundated with judgmental comments about my son’s size. People seem to love to tell you if your kid is skinny or pudgy, “a shrimp” or a future basketball player, even though they have literally zero reference for their comments.

It hit me. Body shaming starts younger than you think. And it only gets worse as you get older.

In their defense, I know the majority of comments, at least when it comes to babies, are not meant to be critical. Most recently, I was flying to visit some friends. On our first flight, someone asked how old our son was. They guessed he was 9 months younger than he actually is. Oy!

On the second, another person said:

“Geez, what are you feeding this kid? He’s huge!”

What I find both hilarious and frustrating about this is that my son is actually average weight and only slightly taller than average for his age. I don’t take the comments personally because I understand the context. I know my son is healthy and I know most people are a really terrible gauge of what’s a healthy size for babies and young kids. (Hell, even I’m pretty bad at guessing kids’ ages.)

But what bugs me is that these types of comments are the exact thing that can set off maternal anxiety like crazy. For a mama with a slow-to-gain breastfed 3 month old, a simple “Oh, he’s brand new, isn’t he?” could be enough to make the mother question her milk supply (more than she already is, because that pretty much comes with the territory). Or a comment that your child is “too big” may make you worry that you’re over-feeding him or in some way “doing it wrong.”

When my son was a newborn, these types of comments would have really gotten under my skin. It took him a few extra days beyond the “normal” 2 weeks to regain the weight he lost after birth (By the way, all newborns lose up to 10% of their birth weight naturally in the first few days after birth. Most return to their birthweight by 2 weeks. Some, obviously, take a little longer).

Nonetheless, while I tried to focus on healing, soaking up cuddles, and figuring out breastfeeding, I had a lot of anxiety about his weight. Was my milk supply ok? Was he latching ok? Was I putting him to the breast often enough? Was there something I didn’t understand going on?

Everything was totally fine, but in the back of my mind, I couldn’t shake that maybe his (slower) rate of gaining weight wasn’t normal.

But the truth is: there is no normal.

When I attended a series of mama-baby yoga classes, it was super interesting to see firsthand how all the babies grew at different rates. Despite most of us exclusively breastfeeding, some babies were big, some were small. Some grew quickly, some didn’t. We were all doing the same thing, nursing on demand and such, and yet, in many ways, how quickly our babies’ gained weight was out of our control.

There would be no 5th percentile and no 99th percentile if there were never babies at the bottom and top of the growth charts.

This obsession with appearance and clothing size and growth charts is just a distraction from all the things we should be focusing on to stay healthy. All the energy we pour into worrying would be put to way better use going on a walk or cooking a meal from scratch.

Body shaming babies and young kids is somehow permissible in our society, but should it be?

We know it’s wrong to call an adult “big” to their face, but with kids? People do it all the time. They think it’s harmless, but I, for one, think it’s not.

So, I have one simple request for you.

Next time you see a baby (or child… or adult… or anyone, really) and feel the need to comment on their appearance, I want you to STOP and put yourself in the shoes of the person on the receiving end (or their guardian).

Instead of guessing their age, blurting out how small or giant you think they are, or really anything else, choose to say something neutral instead.

“Well isn’t that a happy baby!”

“Someone certainly loves [fill in the blank wherever you are…].”

Anything like this is benign, positive, and – most importantly – not judgemental. You might be wondering why in the world is that baby “so small” or be curious about why that baby seems to be “busting out of his clothes”.

The world will be a much friendlier place if we keep body shaming thoughts to ourselves and let people (yes, even babies) just be who they are.

After talking this over with a bunch of other moms, I know I’m not alone in fielding body shaming comments aimed at my kid.

If you’ve been frustrated that body shaming comments start too young, tell me about it in the comments below. Share your own body shaming story – maybe from when you were a kid or perhaps a comment about your child.

PS – Help spread the message that body shaming is wrong at any age by sharing this blog post!