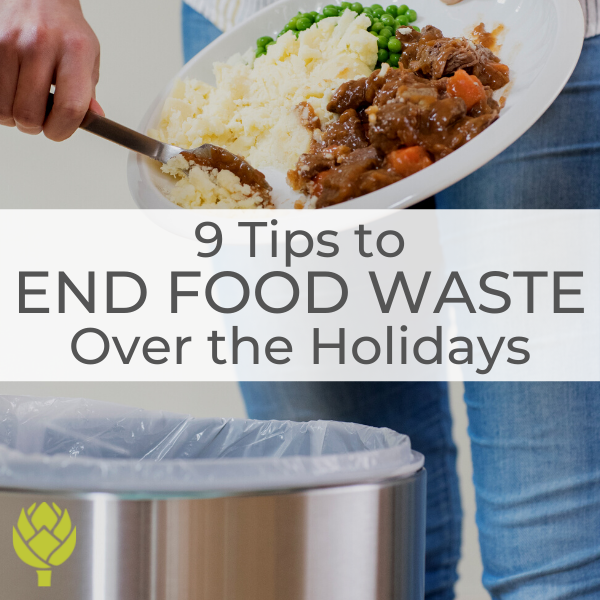 For better or for worse, the holiday season has arrived. While most nutrition writers are busy drafting articles about how to avoid gaining weight over the holidays (been there, done that), I want to talk about another important issue that rarely gets air time: food waste.

In the United States, 30-40% of our food goes to waste (according to the USDA). Annually, this amounts to enough food to feed 1 billion people, according to food waste expert Tristram Stuart. If you’ve ever spent time gardening or working on a farm, you know how much hard work goes into producing food. I find it sickening that so much edible, nutritious food ends up in landfills, instead of filling hungry bellies.

Even more sickening is that some weight loss programs and nutritionists actively encourage food waste. “Just eat three-quarters of the snack bar and throw the rest out,” they say. Or even, “If you left 2 bites of food on your plate, you’d be saving 200 calories.” These are messages I simply cannot endorse. If you’re truly not in the mood for a few more bites, put the leftovers in a container in the fridge for later, don’t purposefully waste food. End of story. (Also, #endrant.)

We can do better when it comes to food waste, both as hosts and guests, at holiday meals. In this article, I’ll share 9 tips to end food waste over the holidays.

1. Make side dishes that people actually want to eat

Or at least, make side dishes that you want to eat. Every family has their favorites, and I’m not telling you to never branch out, but if you’re making a side dish just because you have to, but history tells you that most of it goes uneaten at the meal, save yourself the hassle (and food waste), and skip it.

Research shows that eating on smaller plates tricks your brain into thinking you’ve eaten more food than you actually have. Smaller serving utensils also help, by subconsciously encouraging you to serve smaller portions. Use that to your advantage. Sure, you can always go back for seconds or thirds or fourths, but the fact that you have to take another spoonful of stuffing, get up from the table, or ask someone to pass a dish, gives you an additional moment to check in with yourself and ask if you really need it (I consider this coerced mindfulness).

This does two things: 1) allows people to choose what they want and 2) to choose their portions. If you don’t want any sweet potatoes, you don’t have to have ‘em. Or you can serve yourself a teeny tiny portion, so you don’t hurt anyone’s feelings. I won’t tell and chances are, no one else will even notice.

Be mindful of how much food you serve yourself and also how much of that food you eat. (How in the world can you do that on Thanksgiving? By following these tips.) If you slow down and savor each bite, you might not want seconds (or thirds) at all. On the other hand, if you plow through your first plateful and start in on seconds, oftentimes you’ll get to the point of being over-full and won’t be able to finish what you’ve served yourself—and that food usually ends up in the garbage. This brings me to point #5: plan ahead for leftovers.

5. Bring take-home containers with you

Almost everyone makes too much food on Thanksgiving. The thought of running out of food is a host’s worst nightmare. But, inevitably, almost no one runs out. By the end of the night, there are often conversations around pawning off leftovers, but sometimes there’s no place to put them. Most people don’t want to take home turkey and gravy in a flimsy paper plate covered with some foil (are you gonna clean my car?). But, if you have sturdy containers on hand, it’s a different story. If you’re hosting the big meal, consider having disposable containers on hand for your guests. If you’re a guest, you can plan ahead and bring your own, just in case.

Organic materials, which includes food waste, make up the largest percentage of household garbage (according to the EPA). Instead of these items rotting away in a landfill, they can be composted and become natural fertilizer. Essentially anything other than bones and meat can be composted (hint: those can be used for #7, see below). Potato peels, egg shells, apple skins, pan scrapings, and don’t forget the chunks of sweet potato that your toddler threw on the floor… should all be composted.

Some cities have a composting programs, where they pick up your food scraps along with your garbage and do the composting for you. If you have green space in your yard, all you need is an unused corner to start composting. We’re kind of lazy and have a pile of yard trimmings (grass and the like) where we compost our food scraps. Once in a while we tend to it, but mostly, we’re pretty hands off. It’s good for the planet, our trash doesn’t smell like rotting food, and we end up with nutrient-rich compost to fertilize the garden. #winning

Let me take a moment to specifically address Thanksgiving: Don’t you dare throw away the turkey bones or turkey carcass. That has some of the best nutrition—and flavor—of the whole bird! Encourage people to place bones, knuckles, and any other bits they deem inedible into a designated container after they’re done eating, instead of the trash.

Personally, I put out a stock pot right on the counter for this purpose. I carve all the meat off the bird on Thanksgiving day; the carcass goes right in the pot. All I have to do is fill the pot with water, add a few veggies, and my bone broth is ready to get cooking that night (or I can store it in the fridge until the next day and start the soup in the morning). This means I absolutely, positively won’t forget to make soup. Also, having the meat packed away neatly in its own container makes it easy to grab a piece of leftover turkey for a quick snack (without me having to lug a 10+ lb bird out of the fridge). Psst… Don’t know how to make broth? I’ve got you covered.

8. Remember to *actually* eat the leftovers

I’ve never really understood why some people don’t like leftovers. What’s not to like? You don’t have to take the time to cook from scratch and cleanup is a breeze (there’s no cutting board to wash, fewer pots/pans, etc). That said, a lot of folks have an aversion to leftovers. Maybe it’s the word “leftover” that’s a turn off. In a TedTalk, food waste expert Selina Juul suggested we call leftovers “bonus food” instead. So, remember to eat all the delicious bonus food in your fridge! It helps to store leftovers in smaller containers—or even individual portions—so it’s easier to grab when you’re in a rush. I also like to repurpose leftovers as soon as possible, so we eat them before they spoil. On that note, see #9.

If your leftovers aren’t stored properly, they could make you sick. And spoiled food is wasted food. Technically, any foods that were served hot should be stored within 2 hours of serving. I know few people strictly adhere to this number, but at least use this time frame as a goal. One of the big reasons I carve the turkey on Thanksgiving day is to get the meat in the fridge ASAP. I also tend to eat the leftovers quicker when they are neatly stored (I can easily whip up this turkey salad with cranberries—originally, I made this recipe with chicken, but turkey works just as well).

Personally, I find a giant roasting pan with a turkey carcass on it to be the least enticing thing. It just looks like #somuchwork to deal with. In addition to storing food safely on the big day, you also want to eat your leftovers in a reasonable time frame—no more than a few days. If you know that’s not going to happen, make use of your freezer (Also, take note for next year and make less food!).

There you have it: 9 tips to end food waste over the holidays.

I hope you enjoy the time with your friends and families while also appreciating the abundance of food available. Every little bit of food saved has a carryover effect on the environment, food prices, and so much more. Do your part this holiday season and help #endfoodwaste.

PS – There’s always more you can do to reduce food waste. If you have other tips, please share them in the comments below.

Some areas have amazing programs to help reduce food waste, such as NYC’s City Harvest, which I understand actually collects leftovers from you. Many food banks and the like will not accept home-cooked meals for food safety/liability reasons, but unopened canned/boxed foods are welcomed.

PPS – Think the whole idea of mindful eating is useless on holidays—or that it only works if you eat squeaky clean? I disagree. Here’s my take on mindful eating in the context of less-than-perfectly-healthy foods (I’m lookin’ at you, dessert table!).