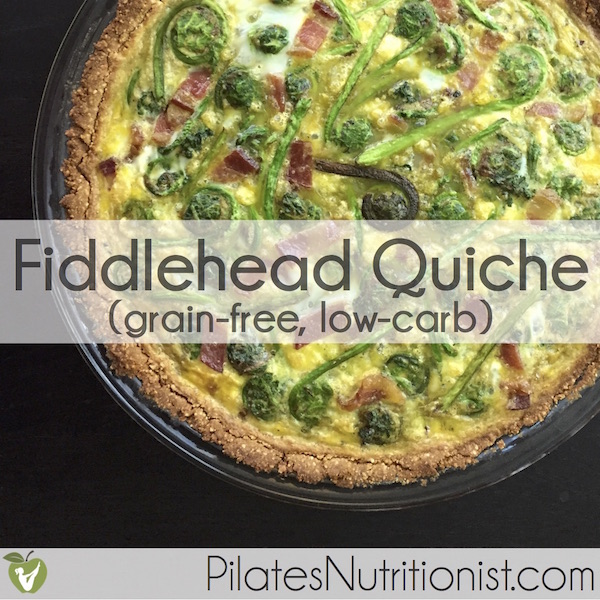 There’s something indescribably satisfying about foraging.

In a world where our food supply is pretty much homogenous, wild harvesting has become that much more fun.

Don’t get me wrong – foraging is nothing new for me. Having grown up in a family where we played “name the tree” on road trips, it’s pretty much in my blood.

In fact, it’s unusual for me to finish a hike without sampling something from the trail. My husband doesn’t even bother asking “What are you eating?” anymore.

Of course, there are some plants that require a bit of special prep to be safe to eat.

In today’s post, I’ll share a little more about fiddleheads, a seasonal and delicious treat I’ve been foraging in Alaska… and a recipe that puts them to good use.

Foraging for Fiddleheads in Alaska

Ferns are ancient plants, dating back to at least Paleozoic times, with a history of use in cultures across the globe. Fiddleheads are baby fern fronds that emerge from the soil tightly coiled up, giving them the appearance of the head of a fiddle or violin.

They are a succulent, mild-flavored, and welcomed addition to my meals after months of shipped-in, flavorless produce from the lower 48 (see this post).

The window for harvesting fiddleheads is pretty short, because once they unfurl into a fern frond, they’re inedible.

So, they make a good excuse to get out and explore, even when the weather isn’t the best.

According to my plant books, fiddleheads are best harvested when the stalks are less than the height of your hand, but I don’t know how valid that claim is. They tend to grow on partly sunny hillsides in the forest (though I’ve found plenty in boggy, lowland areas). They can be hard to spot, since they grow so close to the ground and blend in easily, but if you’re lucky, you can see the dead fern leaves from last year and hone in on them.

As with any foraging, you don’t want to over-harvest and kill the plant. For fiddleheads, I take no more than 1/3 of the plant so there are plenty around for next year.

How to Prepare Fiddleheads

Once you’re all foraged out, get ready for the time-intensive prep. Fiddleheads come with a brown papery husk attached, that you must scrub off before eating – for me, scraping it off with my fingernail under running water was easiest.

Expect to spend more time cleaning fiddleheads than you did foraging for them, but I promise it’s well worth the effort. 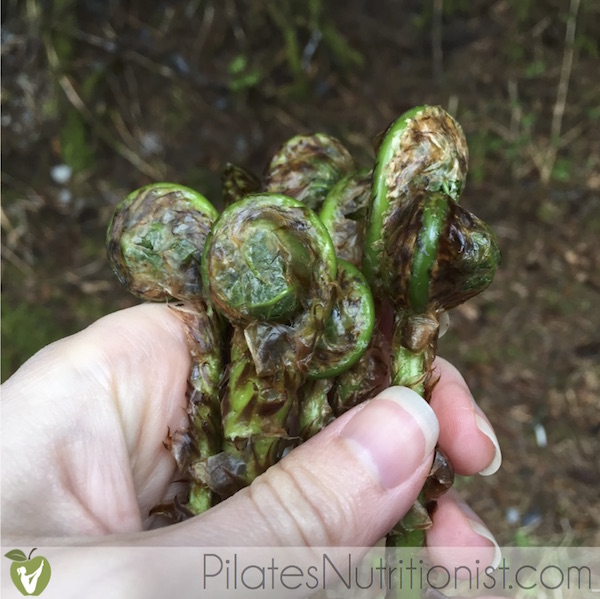 Some varieties of ferns are toxic, so if you’re not sure, consult a plant expert in your area before eating.

Fiddlelheads should not be eaten raw, since they contain the enzyme, thiaminase, which destroys thiamin (vitamin B1) and can lead to a deficiency if consumed in excess. Cooking deactivates thiaminase.

I choose to blanch fiddleheads before preparing in other dishes. They can be used just like green beans or asparagus, so your imagination is the limit when preparing them.

Since they are such a striking and unusually-shaped vegetable, I prefer to cook them whole.

Below, you’ll find a simple low-carb, grain-free recipe for Fiddlehead Quiche. If you can’t find fiddleheads, you can substitute asparagus, cooked kale, or cooked spinach in its place.

NOTE: If you do not eat dairy, use coconut oil for the crust. Omit cheese from filling, add an additional 3+ eggs, and use one full teaspoon of salt.

Why eggs from pasture-raised chickens & cheese from grass-fed cows? 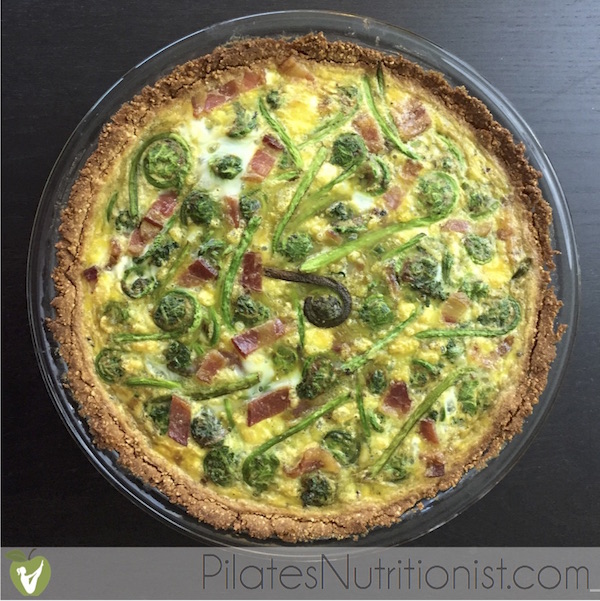 Have you ever eaten fiddleheads?

How did you prepare them? Would you eat them again?

Tell me about it in the comments below.

PS – Fiddlehead quiche most definitely avoids the “healthy breakfast mistake.” Find out if you’re accidentally falling into that trap here.