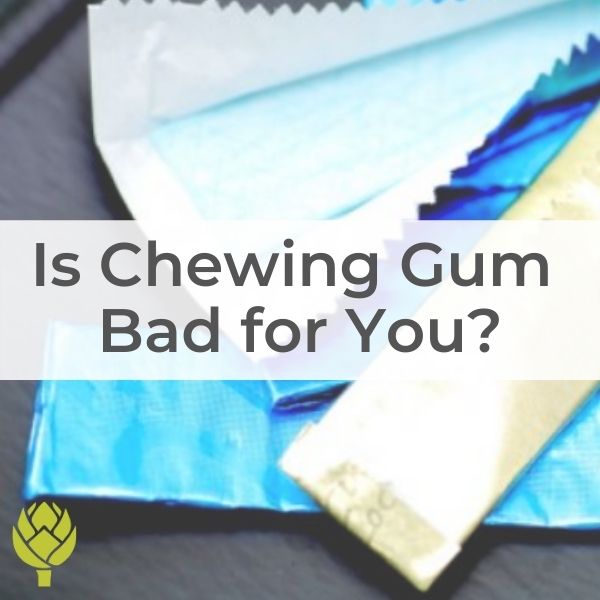 There are a lot of good reasons to chew gum.

But I started to question if chewing gum was bad for me over the past few years, mostly because I noticed whenever I chewed gum, I’d be more hungry than usual, even if I had a piece after a large meal that would normally sustain me for 3 or 4 hours.

While I’ve never been a self-described gum addict (or a fan of artificial sweeteners), I would sometimes make an exception when it came to gum.

If you’ve ever wondered “Is chewing gum bad for you?”, you’ll want to read this post and share it with your friends.

What I uncovered from my research on chewing gum and health will make you think before you chew. Below I cover 8 reasons to question your gum chewing habit.

When it comes to chewing gum, you should know that it…

1. Trains you to crave sweets

The more sweet you taste, the more your taste buds prefer sweet. It’s as simple as that. The less we expose ourselves to sweet tastes, from naturally sweet foods or artificial sweeteners, the less our taste buds will crave them.

Artificial sweeteners, precisely because they are sweet, encourage sugar craving and sugar dependence. Repeated exposure trains flavor preference. A strong correlation exists between a person’s customary intake of a flavor and his preferred intensity for that flavor.” – Yale J Biol Med, 2010

Sweet tastes activate the same reward pathways in the brain that are triggered with drug addiction. And an oft quoted rat study on the addictive capacity of artificial sweeteners demonstrates this perfectly.

Moreover, the satisfaction we get from actual sugar (as measured by brain imaging) is dampened in people who regularly consume artificial sweeteners. This means if you’re using sugar-free gum to satisfy your sweet tooth, it’s not working and it may be making you more addicted to sugar.

A negative correlation between artificial sweetener use and amygdala response to sucrose ingestion was observed.” – Appetite, 2012

3. Messes up your digestion

Chewing prepares your body to digest food, releasing a complex cascade of acids, enzymes, and digestive hormones. We have a direct nerve connection from our gut to our brain and when we start chewing, we trigger innumerable metabolic reactions within our body.

Gum works so well to stimulate digestive juices that it’s even been suggested for people who’ve undergone GI surgery to increase bowel motility while they are still unable to eat food.

The use of gum chewing in the postoperative period is a safe method to stimulate bowel motility and reduce ileus after colorectal surgery.” – Diseases Of The Colon And Rectum, 2007

While gum certainly has a place for postoperative patients, it doesn’t exert beneficial effects for everyone. Anecdotally, some folks have heartburn or indigestion from chewing gum, since acid levels rise to match the food your body expects to digest, only to find it never arrives. Gum can also cause bloating if you swallow air while chewing. But it doesn’t stop there. Chewing gum can negatively impact gut bacteria, as I’ll discuss below.

Just about everything we eat affects our gut bacteria. Certain foods, such as vegetables, support the growth of beneficial bacteria while certain foods or substances harm these populations. A recent study showed that artificial sweeteners negatively affects our good bacteria (probiotics) and may impact our metabolism. In this study, rats with no gut bacteria received bacteria from mice that had been fed artificial sweeteners (aspartame, sucralose, or saccharin). What happened is fascinating:

Splenda (sucralose) specifically has negative effects on gut bacteria, even at levels one fifth of the doses considered “safe” by the FDA (called the Acceptable Daily Intake):

Evidence indicates that a 12-wk administration of Splenda exerted numerous adverse effects, including (1) reduction in beneficial fecal microflora, (2) increased fecal pH, and (3) enhanced expression levels of P-gp, CYP3A4, and CYP2D1, which are known to limit the bioavailability of orally administered drugs.” – Journal of Toxicology and Environmental Health, 2008

Splenda’s antibacterial effects make sense when you look at the organic chemistry and see three molecules of chlorine, a potent bacteria killer.

At the end of the 12-wk treatment period, the numbers of total anaerobes, bifidobacteria, lactobacilli, Bacteroides, clostridia, and total aerobic bacteria were significantly decreased.” – Journal of Toxicology and Environmental Health, 2008

5. Can lead to food sensitivities

Our bodies like change. If we go back in time to hunter-gatherer days, we had to eat by the seasons. That meant we’d only have certain plant and animal foods available at specific times of the year. Nowadays, we can buy exotic food from all over the world at any time of year and many foods have become daily staples.

Some of the foods that people are reliant on can become reactive over time when their immune system never gets a break. And whenever I see mint or artificial sweeteners come up reactive, one of the first questions I ask is if the person chews gum regularly. It might seem benign, but if you’re struggling with chronic digestive issues or other inflammatory symptoms, you might try laying off the gum for a bit.

You can’t fool your brain. When the body tastes something sweet, it anticipates it will receive calories… only in the case of artificially sweetened gum, it doesn’t happen. Dr Wurtman from MIT has demonstrated in rat studies that aspartame suppressed the increase in serotonin concentrations that normally follow glucose ingestion. This leaves your body confused, unsatisfied, and hungry for real food, which has been well documented in studies.

Add to this the confusion your body gets when chewing triggers the release of digestive juices (described above) only to find that real food never enters your stomach, and you have a double whammy effect on hunger levels.

A classic reason people choose gum (and artificially sweetened products) is to cut back on sugar and to control diabetes. For many years it was believed that artificial sweeteners do not and cannot raise the blood sugar. But a recent study published in the journal Nature has flipped this thinking upside down when it was revealed that people who consume the most artificial sweeteners were more likely to have blood sugar problems.

Depending on the types of microbes they had in their intestines, some people and mice saw a two- to fourfold increase in blood sugars after consuming the artificial sweeteners.” – Nature, 2014

Your body isn’t dumb and it knows when it doesn’t get the real thing. Part of how our body regulates food intake is the release of gut hormones, some of which are called “satiety peptides”. When this process works normally, you eat food and your body releases these satiety peptides to tell you when it’s had enough. But this doesn’t happen after eating artificial sweeteners or from chewing artificially sweetened gum.

Both carbohydrate sugars increased satiety and fullness… In contrast, equisweet loads of artificial sweeteners did not affect gastrointestinal peptide secretion with minimal effects on appetite.” – British Journal of Nutrition, 2011

I’ll grab an occasional piece to freshen my breath, but I try to chew gum without artificial sweeteners (xylitol-sweetened gums are available at health food stores).

I also never chew gum in lieu of eating if my body is telling me I’m hungry or if I’m craving sugar. (Despite what shows like the Biggest Loser suggest). Eating the real thing in (very) small amounts is always better than the fake stuff.

I’m also fully aware that if I chew gum, chances are I’m going to be hungrier, so I’m not going to be surprised or frustrated at my body when only an hour and a half after a decent sized meal, it wants food again. My body is simply communicating what’s going on inside and listening to these signals is always a priority of mine.

Now, there is some research that gum might be a good thing.

That’s because the act of chewing itself can help ease anxiety and stress. So the idea is – if you’re less stressed, you’ll be less inclined to use food to manage it. Unfortunately, if the gum contains the artificial sweeteners, you’re working against yourself for reasons I outlined above.

Plus, I believe distracting yourself from stress by chewing perpetuates the idea that eating will solve your stress or emotional problems, which it won’t. As a temporary fix to alleviate anxiety, I see no problem, but when it becomes a daily crutch to avoid the real issue at hand, it’s not serving your highest good.

There is no magic sweetener that will taste exactly like sugar without any of the risks. I play it safe and choose not to make a habit of consuming artificial sweeteners or artificially sweetened gum.

How about you? What signals does your body send you when you chew gum?

Have you ever suspected gum isn’t good for you? If so, why? 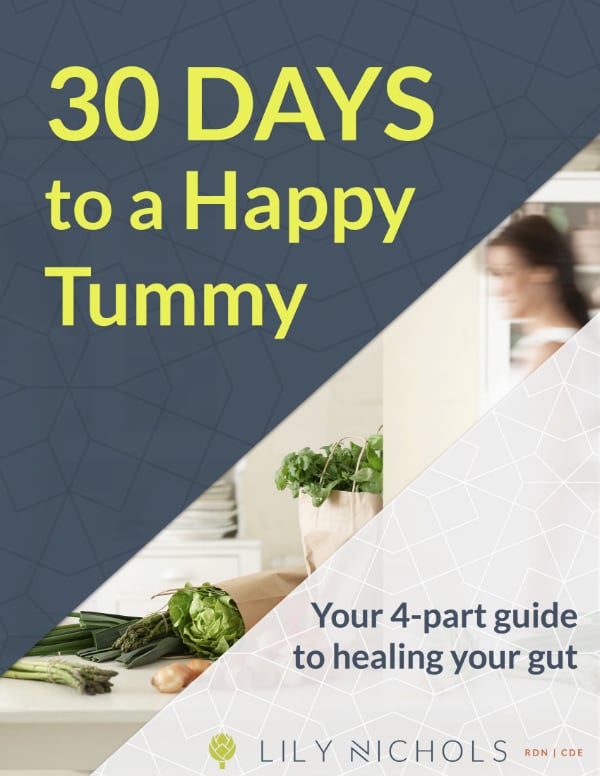 Tummy Troubles Weighing You Down?

Get my FREE guide: 30 Days To a Happy Tummy