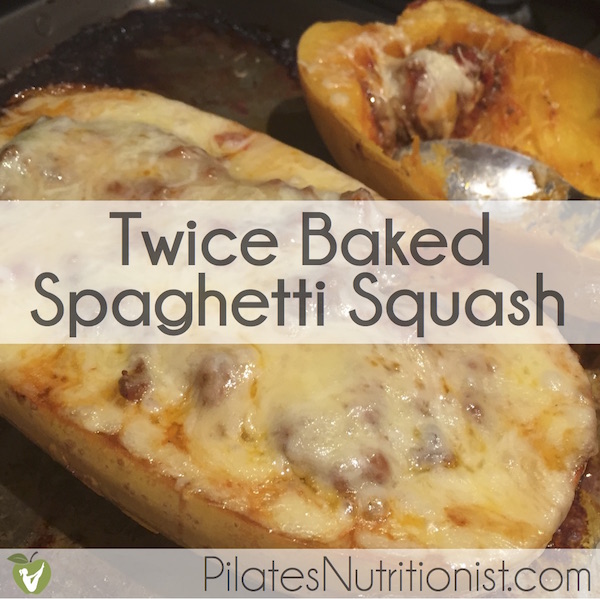 I’ll be honest. The first time I had spaghetti squash, I was a little underwhelmed.

The texture is obviously not pasta, so I wasn’t expecting some kind of culinary miracle, but the squash “noodles” didn’t really absorb the flavor of the sauce.

It just sat on top like some (super) sad excuse for hippie spaghetti. Womp womp.

Mixing it with the sauce before plating didn’t really make it any better. I could rationalize eating it again if I thought of it like a vegetable, not a pasta replacement, but there are so many other tasty vegetables out there that I’d rather eat. (And if I’m gonna go for veggie noodles, zucchini seems to do a better job.)

I wrote off spaghetti squash as another one of those “meh” vegetables.

Then, my mom suggested I try twice baked spaghetti squash.

The gist? Roast a spaghetti squash per usual, but instead of scooping out the noodle-y flesh and topping with sauce, fill the baked squash with meat sauce, top with cheese, and put it BACK IN THE OVEN.

I didn’t think that would do much, but boy was I wrong. When she made twice baked spaghetti squash during a recent visit, I finally healed my rocky relationship with spaghetti squash.

Seriously, if you’ve tried to love spaghetti squash in the past and weren’t impressed, give this twice baked method a shot before you write it off completely. I’m glad I did.

A heads up on my recipe for Twice Baked Spaghetti Squash: I multitask while I cook to get everything to the table as fast as possible.

NOTE: I like to double the recipe and freeze the second squash for later. Simply bake the squash once, fill with marinara, top with cheese and let cool (do not bake twice - YET). Wrap with parchment paper, then foil (here’s why you don’t want foil directly touching tomato sauce!), and freeze for up to 2 months.

When ready to bake, remove from freezer the night before you plan to eat. Set in a baking dish in the fridge to defrost. The next day, unwrap the squash and bake at 400 degrees F for 35 minutes, or until sauce is heated and bubbling at the edges of the squash.

And there you have it: Twice Baked Spaghetti Squash that has amazing flavor and is a breeze to prep.

Last time I made this, I completely forgot that I was gonna take pictures for the blog, hence we already ate one half of the squash before I snapped a pic. Oops.

But, hey, that tells you how good it is. Family meals that look messy on the plate usually taste delicious.

Nonetheless, here is one messy lil’ pic from my plate before I gobbled up the whole thing. 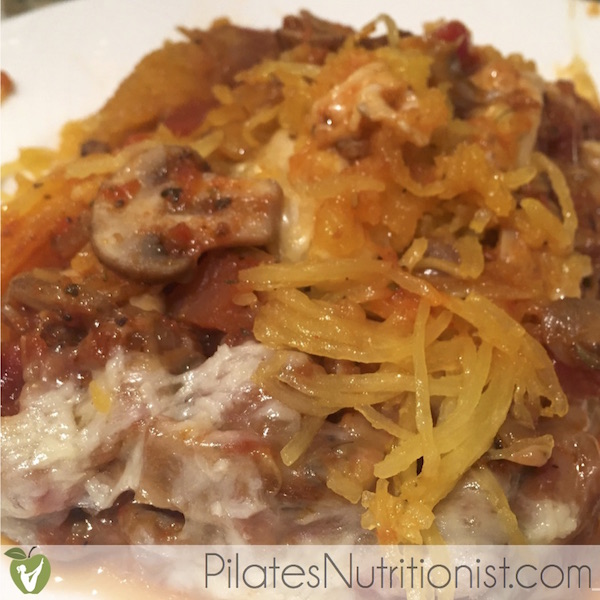 PS – I hope this opens up a whole ‘nother world with spaghetti squash for you. After you try this recipe, play around with other fillings. For example, my friends over at The Real Food RDs have an amazing twice baked spaghetti squash with a buffalo chicken filling. YUM!